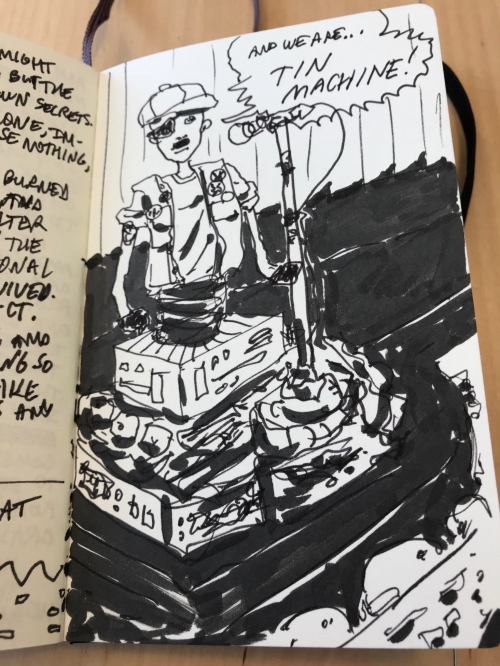 the film had made some kind of impression. étienne didn’t know. he’d never seen it. popular enough to warrant a theme bar in his town’s podunk, dry dock casino. he guessed the bar had probably been added to coincide with the year of the film’s title finally coming to pass. all of it was old, now. he wondered if anyone still cared.

the film’s plot concerned a young man, josef k, who one day wakes up to find himself transformed into an imitation of a human being. a replicant. in fact he was always thus. (the allusions to kafka were muddled.) joe is trapped in a world with no people (sounds like a heaven), but he doesn’t realize that no one, not even himself, is real (same). unbeknownst to himself and the rest of the world’s population, there are no humans left on planet earth. anywhere. whatever examples of the maker’s race may yet survive have long ago fucked off into space, leaving behind their besotted android surrogates to obsessively recapitulate the same tired fantasies, over and over again, on and on, ad infinitum, world without end. so, the film’s characters slavishly revamp many scenes and elements from the original film, to which this later catastrophe was an unwanted, and yet critically lauded, sequel.

étienne vaguely remembered most of this, enough to recognize the comical animatronic musicians whose retinue included the offspring of various famous performers, and whose monarch, though clothed bizarrely in 1970s (?) working class garb—cab driver hat, denim vest, white t-shirt w/ rolled-up sleeves (concealing, not very well, a packet of gitanes), brief rectangular mustache that separated nose from mouth like a dark aluminum spacer set between sections of drywall—was clearly, though absent from the waist down, a partially reconstructed android reproduction of the one and only david bowie.

the absurdly enthusiastic band of robots wasted no time ripping into their opening number.

and i tell myself, i don’t know who i am karl crooned sadly. my father ran the prison

a rombus of pure pink light hovered incessantly near karl’s face, helpfully informing that the lyric most likely referred to eldon tyrell, hated inventor of the replicants from the first film.

karl’s group had been a late addition to a subsequent re-release of the two films. his contributions—whether made before or after his physical death, which occurred a year and some odd months before the release of the second film—consisted of a mere handful of tracks, apparently intended to bookend semi-random sequences from the films:

04.  you feel so lonely you could die

étienne had heard some of the music before. here, the mechanical band performed it on a loop. inescapable.

but i am a seer, i am a liar karl sang, something wrong with his vision.

étienne’s guest never seemed to arrive. as the band clicked through its program, étienne went ahead and ordered their drinks. james would show up, eventually. he’d just have to make due with what étienne chose for him.

dead ones and the living

it was then that he noticed karl’s eyepatch. an odd detail.

karl’s teeth, having evidently been damaged by previous clientele, had been replaced with what appeared to étienne to be a curving half of a polished, black hockey puck. replacement teeth inscribed, rather than fully carved.

soaking up our primitive world

étienne, still waiting for his friend, took this opportunity to avail himself of the head.

their jealousy’s spilling down

but i hope they live forever

returning from the head, étienne saw that james had arrived, and had taken up his seat at their table. he welcomed his friend with an open-palmed slap across the back. james started forward in his seat, but smiled.

even your eyes are new continued karl’s electronic caterwaul.

"i hated this movie," james said, referring to the sequel. "so pointless."

but your fear is as old as the world

you know so much, it’s making you cry

oh, what have you done?

the two men drank in silence.

étienne didn’t care, either. the day had been a long one. and now he wasn’t entirely sure whether he’d seen the film or not. maybe just the original? but then there was something about josef k having a user experience tailor-made for him by—you know what? he was tired.

if you can see me, i can see you karl’s apparatus rotated a full 270 degrees to face étienne directly. because of the eyepatch, he seemed to be staring in two directions at once, but somehow étienne still felt he was staring straight at him. he blinked, and rubbed his eyes, but the robot was still there.

if you can see me, i can see you karl repeated. his face seemed to flicker. an animated animatronic, taking the piss.

from nowhere to nothing, and i go way back

a black substance—oil?—began to gush from karl’s mouth, but the tin machine just kept on singing the same sarcastic lyrics, devoid of meaning, devoid of any connection to reality or current events.

the stars to the west, the south, the north, and to the east

étienne backed away from his table, clumsily, the drinks he’d already downed having impaired his mobility. most of what had been on the table now ended up on the floor. james tutted, unconvincingly, though it seemed to amuse him disproportionately to do so.

a love of violence and a dread of sighs

so take this knife

and sl was back, standing there before him in the bar. karl continued, but by now étienne was only listening to himself.

i’ll burn all your books and the trouble they make

étienne handed himself the knife, but now he had the knife.

who could he be, now?