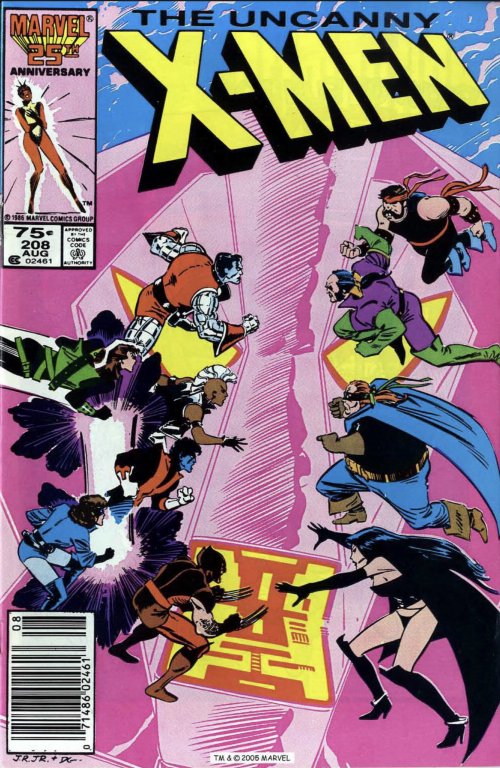 his back still hurt.

étienne stopped on his way to work to fill up the truck. coffee, danish, spinner rack comics. whatever, he bought a copy of uncanny x-men.

sometimes while reading a comic he would flash upon some way the story or artwork could be improved. he would take his pen from his pocket and draw his improvement right on the page. the ink would soak through the page and he would frown. in this particular issue some of the power signatures, as illustrated by the book’s artist, seemed incomplete. étienne added linework as he saw fit.

he took the issue with him to lunch. this time, at jerry’s family restaurant. he finished his french toast and eggs and headed back to work. it wasn’t until he had made it several miles down the road that he realized he’d left the comic book on the table back at jerry’s. probably already bussed away by the wait staff. too late to go back now.

he’d made important notes in that comic.

the next day he stopped again at the pantry for coffee. the spinner rack of comics was gone. "yeah, we’re not going to be getting those anymore," the cashier said flatly. there was no way for étienne to argue—policy was policy. he bought a cherry slush puppie and hopped back in the truck.

most likely, declining readership and increasing encroachment by corporate management into this territory previously ignored by parent companies would account for the abrupt cessation of newsstand distribution. adaptations in alternative media having all but eclipsed the humble, openly dysfunctional methods by which the source material continued to be churned out. item: the comic book spinner rack had been replaced, in étienne’s local pantry, by a large cardboard display of branded, papercraft vr glasses. cheap and disposable, just like the comic books had used to be.

étienne didn’t know or care about these machinations of capital. he just wanted to hold a comic book in his hands and read it, maybe more than once. that would no longer be an option without traveling to another, larger town, where demand evidently supported the operation of a privately owned comic book specialty shop. and who had time for that?