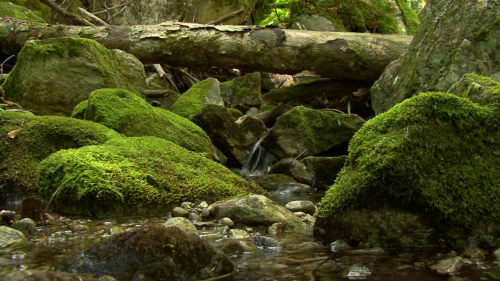 Werner sat on the big rock at the top of the hill in the woods, where the creek began its descent into the ravine, where the trail ended and turned back upon itself. Very cold water flowed around his legs, filling his shoes and soaking his pants. His eyes fell on a patch of moss.

He’d picked up the nine hand positions, and their eighty-one total variations, from a book he’d bought at the mall. The specific mindset, and the verbalization meant to accompany it for each hand position, had been omitted from the author’s account, "for the reader’s safety." Werner didn’t see how this was very safe, being only one-third armed for the exercise. He sat and waited for someone to contradict him.

Fall was happening. The water was cold. This far in the woods he could still hear the city conducting its business beneath him. When more of the leaves fell he would probably be able to see its writhing carcass, as well. Then it would probably be time to find a new place to sit.

From his mind he conjured an image of that new place. He realized it was a place he already knew. He had to let the image go.

The water was seeping into his underwear, and he wondered exactly what it was he was doing. He untwisted his fingers, then stopped, remained in position atop the rock.

Scent of decaying leaves and moss. There were no more words.