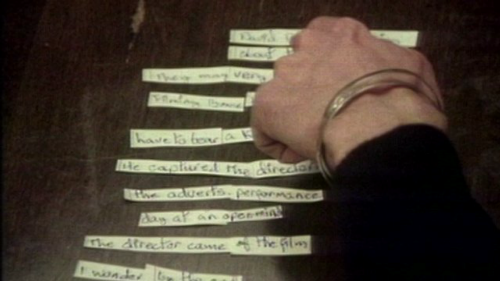 Here P produced from his satchel two distinct manuscripts. "We recommend these." Werner accepted the manuscripts and examined them carefully. "Okay," he finally said.

Werner got to work cutting them together. It wasn’t at all clear this what P had wanted him to do, but P made no move to stop him. Werner continued:

P consulted his emerald tablet. He swiped right to accept the revisions, then locked the resulting mishmash in his satchel. "You may dispose of the rejected fragments as you see fit." He gestured expansively to the starts Werner had not used, and the remains of the two manuscripts he had operated on. Werner nodded. "Of course." He carefully gathered up the bits of text and deposited them into a drawer. Very likely, something here could be salvaged later, for paying work.

That brings us to your compensation," P said, T already heading for the door. T stopped. From a concealed pocket in his parka P produced a sealed envelope. He broke the seal and handed over Werner’s cheque. "Contract’s printed on the back," he indicated, helpfully.

"In perpetuity, of course," Werner acknowledged. This was nothing new. He folded the slip of paper into his wallet.

Werner knew there was no way this could be over. When a knock came on the door he was almost relieved.

It was T, who poked his head into the room (the door had not been locked), apparently looking for his gun. He’d left it laying on the kitchen table. Werner nodded, and T entered, retrieving his weapon and exiting again, all without saying a word.

Werner returned to his empty mug. It was still empty, so he made tea instead.