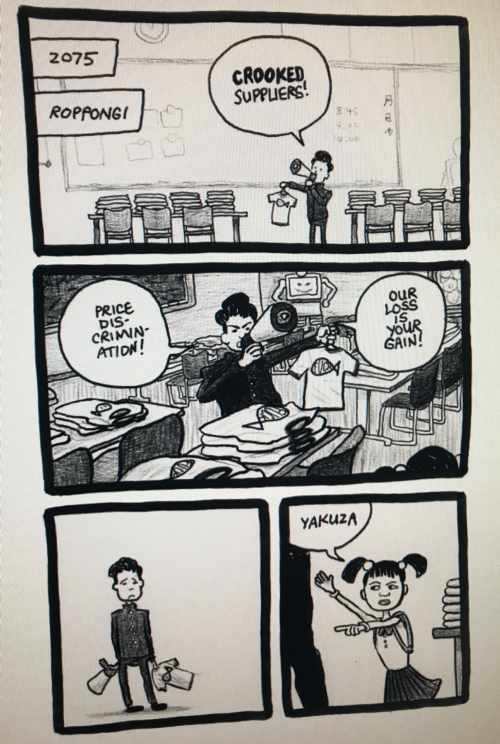 Over the years, as the voyages to and from home became familiar territory, and the peculiarities of each trip became less distinct, melting gradually into the overhead map of her childhood, it would come to seem that there had only ever been one trip. They were always returning from America.

Her brother would probably say that their ability do so was a privilege. It sounded like their mother talking. Cameron knew she could do as she pleased. Roppongi beckoned.

The taxi set down and they disembarked. Andrew was anxious to hit up the parlors, while Cameron went to her room to unpack her things. Housekeeping had gathered her mail into a neat pile on her writing desk. She sat down and began to go through the stack one by one.

The letter she’d sent from America had arrived. She looked at her own handwriting. She couldn’t remember having written the letter, but she did remember addressing the envelope. Whatever she’d had to say to herself would hopefully prove interesting.

It didn’t. She’d written a list of books to read, once she got home. Half of them she’d read on the boat, the other half she hadn’t really been serious about. She had already bored herself.

School would start soon. She hoped to avoid the scoundrel Shinji bin Sony. He loitered, selling those t-shirts with the recent celebrity catchphrases printed on the front. Nobody bought them. Why would they; his family were criminals, nobody wanted to get involved. As she packed her backpack she tried to think of a way she could excuse herself when he inevitably presented his wares in the hallway. She didn’t come up with anything good.

Andrew bought Shinji’s shirts every time he came around. He seemed to think they were funny.

It was snowing again. Cameron decided to take her coat. She finished packing her school materials and headed out for a walk. She’d have dinner down the street. Cook was fine, but sometimes she needed to get out of the apartment. She pulled on her mask and braced herself for the noise of the neighborhood below.