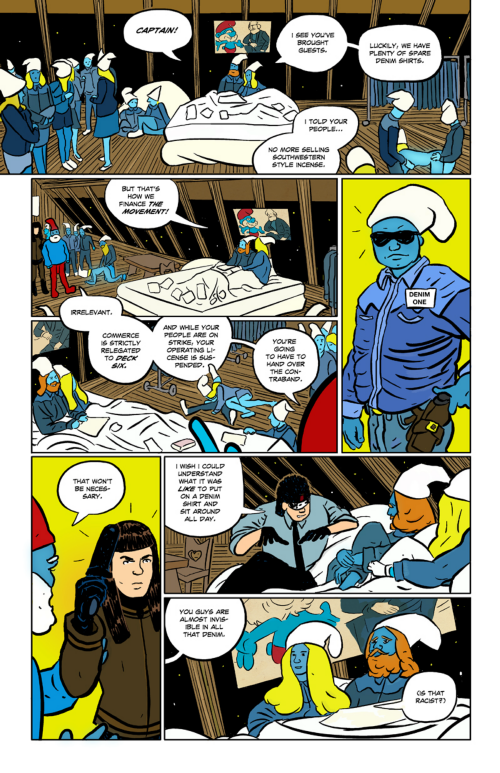 Looking into his eyes one would first be confronted by the plastic strip, alternately flashing a series of targeted, third-party ads. If he caught you staring he might flip over to the mirrored surface. An abrupt rendezvous with that which the onlooker most feared—the complete absence of third-party affirmation.

Building on this tacit exchange with the viewer, Tommy might next offer a cup of tea. He was off his coffee, and as a guest you drank what he offered. That is, if you wanted him to talk business.

Tommy’s business was the traffic of information and goods from beyond the silo. The information he simply made up. The goods he stole from the other families.

Kids in the silo could not get enough of his warez, even though in some cases the merchandise had been stolen from their own homes.

Who could explain it?

The Blanks showed up. Their disgust was transparent, but each individual’s unique vision of this new fresh hell could only be expressed through the printed matter and flare carried upon his person. The zines were generative works curated by personal algorithms, while the buttons were mostly handwritten. In both cases they kept the material strictly to themselves.

Tommy nodded to the guy in front, who he assumed to be their leader. Just as he was about to speak the real Boss Blank surprised him, elbowing through the crowd to reveal himself, resplendent in... well, nothing. He was clearly pissed.

"Let me be perfectly frank," said Frank Blank. "I don’t like the way this is shaping up. Something essential seems to be missing from the template."

Frank Blank stepped back into his cutout. The template, which up until this moment had been supported by his neighbors on either side, toppled backwards and crashed to the floor with a disturbing clatter. Frank glared at them both in turn.

Titters from the Blanks, who were by now all breaking facial discipline.

Tommy’s visor flashed solid white. "You guys are a riot. Love to see all these smiling faces."

It had not been intended as an insult. But the look that now descended over Frank’s face like a theater curtain removed all doubt that Tommy had stepped, oblivious, of course, across some invisible line. Apparently discernible only to the Blanks.

What was he supposed to say?

"We have the cash. Did you bring the stuff?"

Peter couldn’t see them. It was the rare moment when Tommy didn’t seem to need him. He took the opportunity to switch off.

If the Blanks had noticed his suddenly but slowly slumping form, nobody said a word. They were being awfully polite.

Bear considered the Blanks null nutrition. Followers tasted bad. Not bland, but actually bad. He’d tried them on occasion but always came away regretting his adventurousness. They got stuck in his teeth, and then the flavor would linger for an era. Gross.

Non-nutritive Blanks. Hardly unobtrusive, in spite of what it said on the tin.

They were in the way.

Frank Blank pocketed the unbranded energy bar. He guessed these guys didn’t go in for the no-name shit.

"If we’re all finished up here, I have comic books to read," Tommy said, and snapped shut his Zero Halliburton. "Let’s go, Pete."

Peter’s head swiveled from Blank to Blank like a shrugging parrot. "Who the fuck are you talking to? Where did that money come from? And so forth."

"Don’t worry about it," said Tommy, patting his imaginary friend on the head.

Trouble was brewing in the ranks of the Blanks. Certain points of ethics, terminology, and even simple etiquette had presently fallen into dispute. A radical wing of the subculture had asserted that, so long as they were all going to bare facial expressions, well, members might just as well start to allow for variations in grooming, accessorization, and other aspects of the outfit's trade dress. Did anyone here care to advance a counterargument?

And so the battle was joined by essentially every member of the away team who had been dispatched earlier that day to conduct the silo transaction. Reader, it delayed their transit home.

In the days and weeks that followed, once the offending individualists had all found their separate ways back to Blank House, the infection inevitably spread. Almost immediately, individuals asserted their individual points of view. Just as immediately, a volunteer squad of conservatives spontaneously self-organized into a kind of police force, equipping themselves with rudimentary weaponry culled from private reserves (Blank House having heretofore adhered to an stoical—and economical—policy of strictly non-violent opposition to the forces of the mundane world) and proceeded to, well, police the local environs for perceived infractions against the still not fully articulated, prior norms of public conduct.

Militant, certain, and yet not entirely clear.

"What is he saying that you have a problem with?"

One of the New Police screwed up his courage and slashed a thin blue line across his own forehead, in blue paint. A symbol, or so he said, of the radicals’ break with what had previously been agreed in their subculture to be common sense. And the New Police commitment to restoring order.

Nobody understood, at first. Why had he chosen to mark his own face as a rebellion against the individualists? Why had he chosen blue? (Perhaps it was the old jar of blue paint someone kept leaving on the floor near his cutout—it drove him nuts.)

Color would prove a new frontier upon the Blank page.

In these uncertain times, the New Police’s new obsession with blue bodypaint would be certain to attract imitators.

And what could be threatening about that?