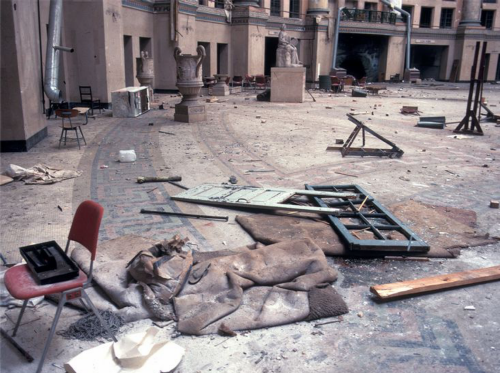 The buildings were connected. (All of them?) Underground, like with the forest. For SL it was just another rumor, but he intended to find out for sure.

The foundations of an old school building still occupied the equivalent of a full city block overlooking the town. Here SL located a service tunnel that supposedly joined the school to the covert subterranean network.

Crosstown traffic was light, so SL was able to confirm that the school connected at least to the abandoned hotel-cum-apartment building down the street before he decided it was time for lunch. He unfolded the sandwich and apple slices from his backpack and unscrewed his jumbo thermos of tea, admiring the decrepit architecture of the vast ballroom into which his tunnel had opened. This place, too, was falling apart. He could tell no one had been in here for a while. Even the trash was obsolete.

Same time, different day. SL was having his lunch in the basement of another abandoned building, also connected to the network of tunnels, though this time he wasn’t yet sure exactly which building he’d stumbled into. Ambient lighting was nil. He ate in total darkness.

He could still hear the traffic.

After a month or two he’d managed to map a lot of tunnels. He set it all down on a big piece of graph paper that he folded into triangles and stuffed into his backpack. Sometimes when he’d go to pull out the map, it would snag on one of his contraband pairs of data gloves, dumping them onto the floor. He’d dutifully pick them back up, but there was no signal down here in the tunnels, so he’d just shrug and stow them away again. It did make him feel more secure, knowing they were in there.

Why was he doing this?

By now his map was crisscrossed with densely annotated routes to and from various tourist traps throughout town. He had no intention of ever visiting any of them again. He had no one to share the map with, nor any desire to do so, which he regarded as a sign of progress.

He folded up the map and stuck it into a crack in the tunnel wall.

He found that he couldn’t care. The only thing for him to do was to walk into town and search for a new subject to master and then drop. He was confident something would present itself, because something always did.