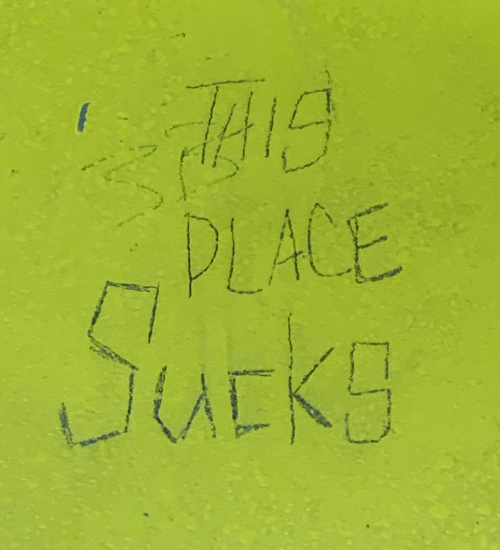 It was Ralph, no doubt about it. Thomas hadn’t seen him since the summer after sixth grade. Nobody had. They’d all hated him beyond any reasonable accounting for taste. Point of fact, hadn’t he died, or something? Thomas felt certain he would have heard about it if anyone from the old team had spotted Ralph before they, themselves, had retired. He could be forgiven his stunned disassociative stupor—nobody would have expected Ralph to survive for two and a half decades on his own.

Thomas shrugged. Sometimes it was precisely those guys who had to struggle at everything who ended up making the best operators. They never gave up, never stopped trying. There was no habitual surrender with them, no sundry moral misgivings to distract them from the mission.

And what was Ralph’s mission, here?

Evidently, to interfere, to cause confusion and delay within Thomas’ government.

But first, he had to go potty.

Thomas had made good progress holding it between scheduled breaks, but his latest performance review indicated some spotting in his big boy trousers. He guessed they had detected his little accidents through some kind of embedded sensor array. A haptic diaper. He had loved those leather pants, and it had torn him apart inside to cut them up, searching for the concealed surveillance apparatus. Which he didn’t even find. Well, that just meant it was time to go shopping.

Thomas approached the head, his visor scanning the entrance for signs of recent visitors. He followed the floor into the men’s room, still unconvinced by the seeming cleanliness of the facility. It just didn’t make sense. Shrugging, he unzipped his fly and edged closer to a randomly selected urinal.

Ralph was still laying there, on the ground. Bruised, but apparently alive.

"I couldn’t get anything out of him," Piotr said, and climbed off of the Little Green Man. He shook up a Grap Pop and cracked it open, directing the overflow as it spurted all over Ralph’s prostrate pre-carcass.

Dr. James Joyce Fadd arrived at DET-86 shortly thereafter, flanked by two assistants Thomas didn’t recognize. They were there to work with Ralph. Some initial trouble with Dr. Fadd’s login credentials, but within a few hours they were all whizzing downward through the subbasements, even below the government, to a neighborhood Thomas had never seen before. Nice place. Dr. Fadd appeared to know where he was going. As usual, Piotr stared straight ahead and said nothing. Thomas tried to do the same. After a while he tried to whistle, but it seemed he had forgotten how.

No doubt it had been expensive to clear the area above ground in preparation for apprehending Ralph, but all would likely prove worth it in the end. Even if Ralph wasn’t consciously aware of much, quite a lot could be gleaned from the caches in his pressure suit. In spite of the Gray Pop, Ralph’s gear was mostly clean, and still in working order. All in all, Thomas reasoned, a sound investment.

One remaining detail troubled him.

Why had Ralph signed up with the enemy?