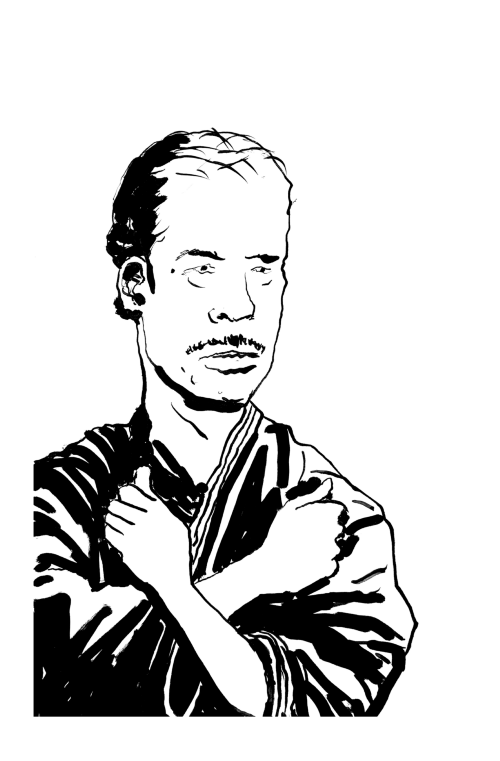 Instrumental track from David Bowie’s 1977 album. On repeat, for some reason. The sound system had been installed first. They were still working on the lighting.

Jason had found out about the mall reopening from scuttlebutt online. He used to come here as a kid, looking for direct market titles on the plexiglass and pressboard spinner rack at Waldenbooks. And now he was moving his comic store here. Full circle.

He called his shop the Floating World. (Europa was not amused.) Focusing on titles he actually enjoyed himself, but still willing to stock mainstream fare, he didn’t pass judgment so long as people were buying and enjoying comics.

Granit’s enormous body was almost entirely covered with moss. Probably to mitigate the smell, Castillo deduced. Not that it was really working.

He shifted his grip on the katana, twisting the blade just so, reflecting a stripe of fluorescent light directly across Granit’s eyes, something like the dramatic trope from STAR TREK: THE ORIGINAL SERIES, a solid white rectangle across Kirk’s otherwise deeply shaded face. Granit winced, blinked repeatedly.

It was at this moment that Castillo removed Granit’s left arm, separating stone from stone, moss from moss, in one fluid movement, before returning his shitty sword to its equally shitty scabbard.

Granit looked to his master, who remained, if you’ll forgive the pun, stone-faced, and then he looked back at his attacker. This stranger. This...

Granit picked up his severed arm and advanced towards Castillo, who hadn’t expected this, at all, swinging it like a club. Castillo backpedaled.

Daisuke rose at once, clapped his hands in approval, and retired to his backroom office.

Now, Castillo had only come to the mall to get his sword sharpened. He hadn’t planned on a mall brawl with his replacement, a giant concrete teenager too eager for acceptance into this ancient, though sparsely documented tradition. Clearly, Daisuke was still sore that Castillo had stopped coming to training.

The Lt. stepped aside and Granit crashed headlong into the security barrier at the front of the dojo. Daisuke had activated it shortly after Castillo had entered from the gallery, to prevent bystanders from being injured. Now his golden boy was sitting on the floor, a pile of broken rocks and dust.

"We’re closed," Granit finally said, and dropped to the floor. His severed arm was not far behind him.

"You need to take a shower," Castillo said, cooly.