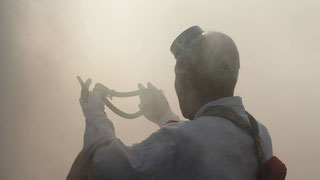 SL found a payphone and made his call. Then it was time to walk. He’d obtained a map from Esmé, and planned his route according to a circuit designed for mall walkers. There were even arrows painted on the floor, and mile markers at various points along the circuit, if one knew where to look.

This would be easier than the trek here. Winding over ridges, through yards, across parking lots.

The four mile track inside the mall went by in a flash. SL wasn’t even winded. Maybe it was his training. Five years ago this would have killed him.

Something he read in a book.

It had drawn him to the mall.

"You see, language itself is theft," SL was saying. Esmé didn’t see. She rolled her eyes at Ororo, who was for the most part not paying any attention to the old man with the walking stick. And the little tokin cap.

"I seem to be stuck," SL confessed, glancing at Ororo for moral support. She returned his gaze, holding it slightly longer than he could handle. He finally dumped the comics out of his bag onto the (food court) table, and shrugged.

It was time to move on.