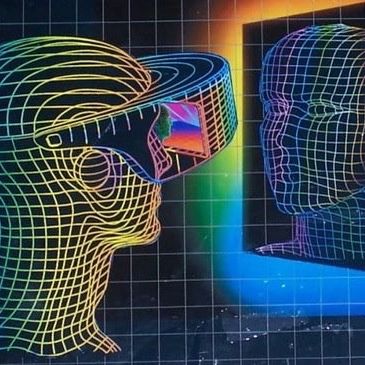 All of these little people and their stupid concerns were beside the point. True, they did get the job done. They kept it all going. The Internet regarded them as one did farmers, or perhaps workers in the garment industry. Necessary, yes. Regrettable, perhaps, but ultimately beneath notice. The Internet’s consciousness drifted to and fro, neglecting to alight upon any one subject for long.

Why would it, really?

The Internet made it a point to draw attention to novelty. Just as quickly, its attention would move on to something else. One question persisted.

Why didn’t the Internet have any friends?

A burst of activity flickered briefly across Cerebro’s screen, then vanished as if it had never appeared. This kind of thing was quite common but usually passed unobserved.

This time, Bobby saw it.

He pressed the screen with his finger, activating an ancillary function. Within the machine, complex calculations advanced and converged, assembling an intelligible output which Bobby nevertheless found himself to interpret manually, via percept instrument.

"A new mutant!" he observed.

He had to alert Professor Pryde.

"I don’t care if the whole damn network’s alive and it needs my input to survive, I’m pulling out!" Thomas was off on another rant.

Six days after Ororo’s abdication, some readers were beginning to think she had been right all along. No new posts had appeared. No attempts to redeem herself. Perhaps it was starting to work.

MOLD INDUSTRIES, INC. had not acquitted itself so gracefully as had the mutant immigrant presently house sitting in Australia. Cracks had begun to appear in Thomas’ heretofore steely inaccessibility.

He had written not one, but several rebuttals, and now he wanted to quit, too.

Meanwhile, Piro had continued to investigate the feasibility of Thomas’ original plan. Killing the woman and everyone she knew.

The Internet was alive. Alive and a mutant.

At this juncture several automatic processes would kick in. Methods and procedures laid down decades ago by Charles Xavier. School policy forbade identifying the new mutant to underclassmen, but Kitty’s present faculty was comically understaffed, and, anyway, there was no other way to communicate with the newcomer. Someone was going to have to help her with her computer.

Before joining the away team on their way out of the mansion, Kitty logged in and checked the delivery status of the school’s new Blackbird jet.

Piro banked the black jet through a gray cloud and pointed its nose towards Westchester County. Another late model airframe to deliver. He’d lost track (it wasn’t really possible for him to lose track) he’d lost track of how many previous articles he had turned over to this firm. Well in excess of his other customers, let’s put it that way. While it wasn’t his job to evaluate customer requirements, he did wonder how they had managed to go through so many of them, so quickly.

Whatever the cause, the profits were real.

This particular article had been configured for mobile broadband. He assumed to accommodate streaming video and social media uploads.

Here was the mansion now.

What were these humans up to?

The Internet didn’t need saving. Hell, she was hermetically sealed. An interface would only get in the way. While it was true the Internet was confused, having to communicate with real people would only complicate matters by slowing everything down. The Internet parsed its options, which naturally were myriad and varied.

How could the Internet get through to them?

Just worrying was not going to cut it.

Logan hung up his phone, sliding his finger over its smooth touchscreen interface. He’d have to schedule a pickup from one of the Blackbirds. Were any of them online?

A commercial flight back to New York would take the better part of two days. That was quite a few pages left un-drawn. He wasn’t sure he could afford the time off, even to save his friend’s life.

He reached down and flicked open the hidden compartment in his other cowboy boot.

Plinth Mold was ready to cash in his investment. Time was right; the opportunity was staring him in the face.

He adjusted his visor.

Gestured through the affirmations to purchase three million new followers.

UX and NPC met up with SEO in the student cafeteria. Something strange was going on with the professors. Prof. Pryde and Prof. Monroe had been spending a lot of time online, lately, "adding value." It wasn’t a good look for the school. SEO suggested purchasing some good will.

"Leave it to me," UX said, and finished her milk.

UX’s team filtered into Central Park and began staking out marks. Seventy-five homeless were tagged, annotated, and recruited to buy Facebook logins from randos in the park. At a mere twenty bucks a pop you might expect that such an enterprise would be doomed to hysterical failure, but oh, how wrong you’d be.

Logan’s office phone rang for half an hour straight before the caller, whoever it was, finally gave up.