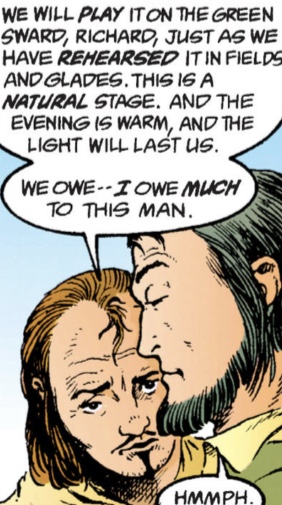 vidya took only what was necessary, and headed for his makeshift shelter in the woods—several bales of hay, a few loose boards torn down from a decaying barn, and, for a roof, a plastic wading pool found at the fenced off trash dumpster near the road into town.

he leaned his head back against the hay and read his comic book. it would be dark soon. fortunately he’d brought a flashlight. the hay bales were already starting to go moldy, and the smell was getting to him. he thought he heard a dog.

forgot to bring a snack.

he wanted to keep reading, but there was something he had to get down on paper. he laid the comic book down gently on the hay and opened his notebook.

maybe fifteen yards away, p and t pulled on their suede lion suits. "why do we have to do this?" t whined. "don’t worry about it," p assured him.

vidya wrote more and more and more of it down. he filled a few pages in his notebook before pausing to think. he wouldn’t re-read, this time. onward, forward, while there was still time.

vidya paused again. the next bit would decide everything. he shook his head and continued.

hermes turned himself, slowly, to face the reader. the unmistakable glint in his eye betrayed what had at first seemed to be a friendly gesture. "dear reader, are you getting any of this?" he asked, smiling warmly. seeing that the reader wasn’t, he added, "don’t worry about it," and winked mischievously, quietly, yet smugly amused at the feat of self-reference.

t blundered a few paces into the clearing, tripping over a tree branch that had fallen across his path. his lion mask finally tumbled loose, hitting the ground with a dull thud. "m-meow..." he cooed, weakly. p shook his head, still smarting from hermes’ jibe.

vidya thought again that he heard a dog. he poked his head out of the shelter and saw nothing. the sun had gone down, and it was starting to get cold.

sl barged suddenly into the clearing, swinging his elaborately carved walking stick like a baseball bat. he was shouting something about due process when p and t dove for cover. they both seemed spooked by his sudden arrival, and each of them clambered backwards into the brush, awkwardly displacing different components of their lion costumes, desperately vying for the security of the tree line. vidya was never able to gain clarity on this point: why were they both so afraid of such a minor character?

étienne and violet traded stories about their grandparents, great grandparents, aunts, uncles, brothers, and sisters, some of whom had owned original pressings of bowie’s early 21st century albums. étienne’s favorite bowie character was the anonymous, unshaven internet troll, clad in cargo shorts, hawaiian shirt and flip-flops, who played on all the star’s later studio cuts. violet somehow had never heard of that one. they agreed to disagree.

at some point vidya had had enough of the moldy smell. he tore the pages he’d been working on out of his notebook and shoved them into a gap between the rotting bales for safekeeping. he egressed the shelter and kicked over the wading pool, breaking the illusion of an intentional structure. as he wandered away from the site, the whole cast of characters converged on his position.

"i’m not being sarcastic," sl said, apropos of nothing. "i am sarcasm."