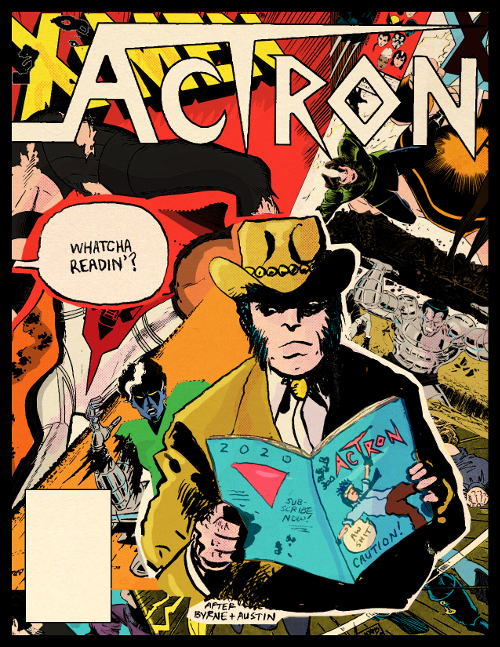 Pen scratches paper. Logan could ink for days, maybe weeks at a time. No breaks. What did he care? It was work.

this was nothing like his life back at the X-Mansion. In fact, he’d found that he couldn’t work there at all. Too many distractions. The kids could not be persuaded that he needed silence in order to concentrate. Some of his peers (if you could call them peers, since his enhanced senses and healing factor afforded him an otherwise unobtainable advantage over the competition) some of his peers actually listened to music, or watched TV while they worked. Podcasts, heh. Not this illustrator, bub. He’d black out the whole entertainment industry if it were feasible. As it was, he simply drew his blinds and drew his pages, his workspace illuminated solely by the soft light of an unshaded desk lamp.

Deadlines were an issue. No pun intended. He found that he could comfortably skip meals for upwards of a week before the hunger began to intrude upon his concentration. Much beyond that and he’d need some kind of snack. mostly, he nibbled stale cheese at his drawing board and got on with it.

Beer was another story. And his mini-fridge was empty.

Logan stood up and his stool fell over. Symbolic. He locked up his room and lit a cheap cigar on his way down the stairs to the street. Off to the liquor store for brews.

Piro slapped the dip pen out of Tom’s hand.

"No. Again. What is the first thing we do when we are handed a pen?"

"Wrong. Check to see if it’s loaded. Never take another artist’s word for it. We always check."

Tom stooped to retrieve his pen. Removed the nib and checked the barrel. Nothing. He slid his thumb over the sensor and logged in.

Tom wrote his name on his paper.

Ororo had no way of knowing what they were saying on the Internet. To be honest, she’d never even owned a phone (and in any case, there would be no signal, out here). Her idea of keeping up with events was watering her plants.

This made it especially awkward when it came time for her to manage the school’s social media presence. She had to admit she was completely lost. Which was hard for her. Even Kitty was getting too old for this shit. Logan had hit upon a scheme where the exercise might be turned into an opportunity for youngsters to earn class credit by helping senior ("Heh," he had said) staff foster the impression that the school remained engaged with contemporary human culture. And then there was the communications delay. The town’s connection was still only good for part of the day.

Ororo had chosen to post reviews of comic books.

Her decision had been implemented too quickly for Kitty to intervene. She learned of Ororo’s views at the same time as the rest of the world.

You couldn’t take it back.

"We’re not just shitting these out for our health," Tom said, closing the tab. He’d been passed a link to some bullshit blogger slamming his latest work. "We spend too much time on these things to tolerate this kind of half-engaged criticism by posers who probably don’t even read the books."

"I’ll fucking relax when I feel like relaxing, and I’ll tell you what," Tom said, not completing his thought.

He had no idea.

There had been so many members of the team over the years that nobody was really quite sure who was in and who was out. Permanently? Well, who could say? The Professor hadn’t left instructions before he fucked off to outer space.

Kitty maintained the rolls as best she could, clicking and backspacing over obsolete entries. She spent a fair amount of her time contacting semi-inactive X-Men and confirming their non-interest, current whereabouts, recent noms de plume, and present pronouns. Other facts and figures she considered extraneous. What with the secondary mutations, alternate art teams, and corporate interference with editorial, it was never a solid bet anyone would remain the way you remembered them for long. It was always best to check. Trust, but verify, as Logan might have quipped back in the ’80s.

It was almost a security strategy.

Plinth Mold had warned that recent earnings reports had proven disappointing. No one in the office predicted that the remedy would be so quick to arrive. Nor so severe. MASSIVE FICTIONS was getting out of the comic book business. What would they do next?

Piro informed the group that their new business model involved the distribution of plastic trinkets fashioned after the "poop" emoji.

Tom was loving it.

Reader, it wasn’t quite the beginning of the end, but if you’ve read my other books then you’ll have begun to suspect that the end was well on its way.

The team brought their usual measure of professionalism to the endeavor. Within weeks, MOLD INDUSTRIES, INC., controlled a majority share of the plastic poop emoji market.

With this the boss was well pleased.

Back at his drawing board, Logan couldn’t shake the image of what he’d just seen, down at the liquor store. A child’s toy that looked just like a (cartoon) piece of poop.

He sniffed the night air as it drifted in through his open window.

All he could smell was plastic.