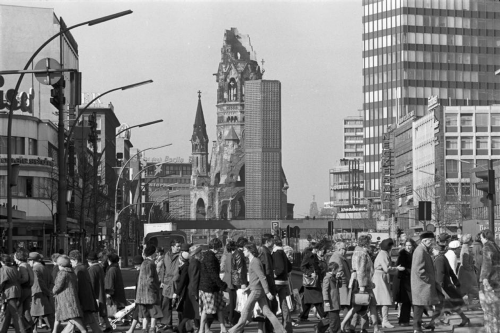 It would require some unspecified effort to find out just when he had arrived at the hotel. SL no longer had any earthly idea. It would have to have been before Christmas (he remembered attending a Christmas party in the hotel lobby), but beyond that, he could recall nothing of his arrival in the little town.

He knew why he was here, in West Berlin, and that was to forget about things like this. Like his friend, he’d find something else to do with his time.

Today he ordered lunch in his room and settled in to review more corrections from his journal.

In the afternoons he would sometimes walk into town to gaze at the traffic as it meandered by on the main road, or to purchase additional items at the drug store. Today he needed blank cassettes and chewing gum. And they were all out of gum.

SL ignored the spinner rack of comics that had imposed itself between him and the register.

Nobody asked to see his ID.

Walking around town would have been almost pleasant if not for the overzealous NPCs chucking beer cans at his head at suspiciously equally spaced intervals. Too bad.

SL varied his route. The algorithm he chose was effective for only a few iterations, so eventually he had to alternate algorithms via an additional, algorithmically generated algorithm.

All of this was possible only because he had held on to the data gloves.

When he was finally caught he had to plead with the hotel administrator to keep his room. At length the stern twenty-something relented, but required him to hand over the contraband data gloves. He went along with it, for now. What else was he going to do?

Owing to a lack of material, he wrote what he knew. Presently this consisted of various ephemera: shopping lists, song titles, ideas for t-shirt slogans, character names and tentative biographies, what he could remember of his family tree, reviews of local shops and eateries, profiles (with analysis) of local politicians, a short inventory of the contents of his room, and a new draft of his final will and testament.

Satisfied with his progress, he closed the journal and returned to his search for the secondary backup pair of data gloves that he was sure he’d stashed around here somewhere.