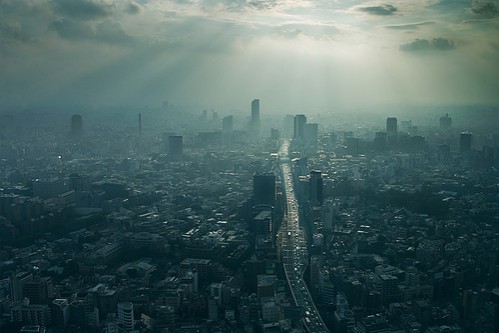 Nistopher again. He’d come over to SL’s apt after his last day at work, and now, beer in hand, he held forth on matters personal and political.

"Everybody who lives somewhere else," Nistopher countered wistfully and sipped his beer. He poured some of it out on his hand, made a fist. Slammed it down on the kitchen sink. "I used to live somewhere else."

"Well, now that you’re no longer tied to the company maybe you can think about living somewhere else, again."

"In this economy?" was all Nistopher could muster. He stared out the kitchen window, straining through the greasy fingerprints on his visor. His eyes crossed.

SL stole a glance at the wall clock.

"Say, why don’t we move this into the living room. Maybe we can pick up a signal from the office before they start shutting down for the day. I’ve got something I want to show you."

"Don’t let me catch you off that Internet again." Nistopher was imitating the raspy, cigarette ravaged voice SL affected (SL had never smoked) with his subordinates at work. He staggered and nearly toppled SL’s rickety old CRT display. Haha.

"Okay, good one, buddy," SL said, patting his old cubemate on the shoulder. There had to be some way to get him out of here before he puked on the carpet, or on one of his vintage mechanical keyboards. In addition, SL still had to go to work in the morning. What to do?

"I tell you," Nistopher told him, "I don’t know if I’ll be coming back." He was bargaining now with chips that had already been taken away from him. "And that woman can kiss my ass." Here Nistopher referred to their mutual manager, whom SL had also found it hard to get along with. He seemed to be reaching the series finale of his long-running soliloquy, piloted and premiered so many years ago, so SL nodded one last time and patted his ex-coworker’s arm a bit more firmly, locking the door as Nistopher finally exited the apt. Roll credits.

That could have gone better, SL thought, but at least it was over.

SL tapped his visor and shut himself down for the night.

Fell asleep thinking about his 401K.

Promotion. They moved SL up to the second floor. It was very much like the first floor, only with windows. From his desk SL could just make out his car in the strangely-extant, open-air parking lot. There were not a lot of two-story buildings left in this part of the city.

Work was okay. Now he managed the fellow who had moved into his old position down on the first floor. His one and only direct report. Not a recipe for swift advancement, but he’d been promised more direct reports in the next quarter.

On the day of the big fire SL tried to make sure his man made it out of the building safely. That was what you did and that was who you did it for—the man beside (or in this case, under) you. Managers on the second floor were able to break their windows and leap onto the street, some suffering broken ankles, but all surviving the calamity. Most everyone on the first floor was trapped, locked in by the failing security system. Those few who dared venture up the stairwell would later find that their employment had been terminated even before they had jumped out the window. Insurance would not cover their injuries.

SL’s man did not survive. He’d seen a handful of his coworkers running up the stairs but elected not to deviate from company policy. SL had already decided to let him pass, but his man never appeared.

SL’s hands were tied. There was nothing he could do.

A year or so later, promoted again. SL now had his own button on the lateral elevator, which transported him directly to his desk. (All right, everybody used the same button, but when SL pushed it he was delivered to his own desk.)

The building was further downtown, in the heart of the city, and was very much taller than the firebombed wreckage of his old office in the two-story walk-up. This place had history. Gravitas. Balls. A hundred years ago it had been hoisted up, twisted on its base, and then drilled back down into the earth nearly a block down the street. And that was only foreplay, foreshadowing the renovations that would ultimately climax in its grateful reception as the tallest building in Megatokyo, fully six times its original height, eclipsing even the twirling spire of the Shit Emoji Tower across the street. In a city full of tall buildings this place was very fucking tall, indeed.

Advertising on and around the building was minimal, smoothly textured, and mostly generated in-house, which distinguished his company from its many neighboring competitors, each of whose headquarters stood veined with uncurated spam, great marbled sprouts straining futilely towards an indifferent gray sky.

SL’s new job was hard to pin down. He came in to work. He logged in to his meetings. When it came his turn he read form his notecard, valiantly straining credulity, but he had no clear sense of his task. As a senior executive he enjoyed the use of a bunk in the penthouse dormitory, so even the ride to his desk every morning seemed pointless, ostentatious. Why did he bother coming in at all? He always arrived at the same conclusion: his desk was too large and his chair was uncomfortable.

But, it seemed to suit him, and generally he was not unhappy enough with the trajectory of his career to try and make any drastic change.

In his spare time he began to work on his resume, surrendering to the contour of his immediate past, typing and re-typing each draft on his absurd manual typewriter, feeding each resulting hardcopy into his personal paper shredder. He captured one such performance in a picture frame and set it up to cycle indefinitely, facing in toward himself on his desk.

Occassionally he thought about West Berlin.