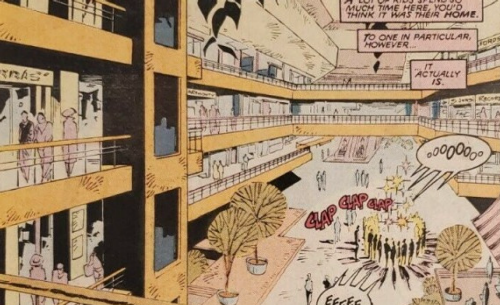 The roof of the building was far away from the internecine squabbles of the mall. Endless civil war amongst factions who weren’t even supposed to be operating businesses within the condemned structure in the first place. The relentless bickering was bad enough, but couldn’t they all see that stooping to property damage and violence against the customers only proved to endanger their business model?

Granit sat on the bare roof. He’d already destroyed one lawn chair (far too fragile), and now he was concerned that his great weight was damaging the weather sealing under his giant stone ass.

Everyone assumed he was a teenager. Why?

The roof sagged. He wasn’t sure if it was his fault.

Daisuke had just named him Soke, inheritor of the mall dojo.

Ororo came back with the whole cup of chopsticks, dumped them on the table. Started erecting a complicated looking structure, elbowing condiments and napkins out of her way as she worked. She took the Chick tracts and wadded them up, one by one, under the base of her wooden shrine. Snapped her fingers and a tiny bolt of lightning set the whole thing ablaze.

Ororo was a mutant, weather witch, worshiped as a goddess amongst her tribe. She had grown up a pick pocket on the streets of Cairo before at last returning home to her ancestral village in Kenya.

And now she was here, wasting time at the mall.

There was a rumble of thunder as a tiny rain cloud appeared above the table, followed by a tiny rain storm that doused the flames.